Have you been watching the Olympics?  I have seen limited amounts, and mostly what I have seen has been swimming.  And I have to say it has left a really bad taste in my mouth.  Not because Australia is not winning as many golds as expected, but because of the "disappointment" in losing gold and gaining silver.

The footage of Emily Seabohm was truly heartbreaking.  As a mother I had tears in my eyes watching her say she felt like she had let her mother and her family down.  YOU MADE IT TO THE OLYMPICS AND WON SILVER and frankly, any mum is proud of their child, no matter what their achievement. 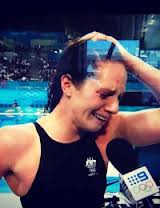 For a commentator to ask directly after a race, when the adrenalin is still pumping, and the athletes have not even got their breath back, if they are "disappointed" or "devastated" with that result is just disgraceful.  Especially since Grant Hackett has been there before.

Thank goodness for Liesel Jones, who came out smiling, saying how great it was to just BE at the Olympics.

What sort of message are we sending our kids.  My son, M1 who loves sports, has even started saying "they only got silver".  No.  They did not ONLY get silver.  They won silver.  Stand up and cheer and say well done.

The rowing boys (apart from the drunken rampage thing) were a breath of fresh air.  Happy to be Silver medallists (and note to the London Olympic organising committee - where was the dais for the rowers to stand on???) and gracious at coming second.

Whilst I agree, winning surely must be the most rewarding experience, surely the fact you made it to the Olympics (partly due to my tax dollars, too I may add) should be good enough.

The commentary and  exasperation needs to stop.  This country, one that claims to be sports mad, is currently shooting itself in the foot.  What junior athlete (or parent of one) would wish to compete and train, only to be told you are not good enough.

Not good enough Australia.... Silver, and dare I say it, Bronze and just making it to the Olympics is enough.  Well done!

I love reading your comments.... thanks!

Super Ordinary Mum
Brisbane, Australia
I am mother, worker, friend, sister-in-law, daughter, daughter-in-law with a love of organising - organising everything except my own life that is!

Some of my favourite Blogs